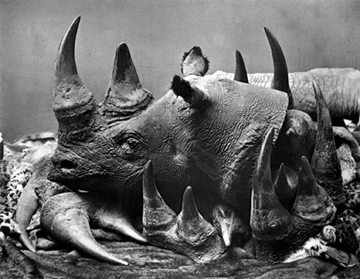 The news is racing across the globe as the Western Black Rhino (Diceros bicornis longipes), the rarest and most endangered rhinoceros subspecies (with only 10 surviving in 2003), has finally been red-listed by the International Union for Conservation of Nature.

On July 8, 2006 the subspecies was declared to be extinct after extensive searches in the last enclaves of Cameroon yielded no evidence of surviving rhino. However, local unverified reports of sightings have persisted in Congo (South Sudan), but with no protection measures in place, the IUCN and leading field specialists now hold no hope. On Thursday, November 10th D.b.longpipes was officially added to the annual list of endangered, threatened and extinct plants and animals. The nearly 62,000 species and subspecies include an estimated 25% of the planet’s mammals.

This is particularly discouraging news as the Vietnamese Javan Rhino was declared extinct in October and the Northern White Rhino has been declared probable for extinction in wild population outside of captivity. In addition there has been a surge rhinoceros artifact thefts, global poaching, and extraordinary sales in the secondary and black markets. As the live populations dwindle, there’s intent to hoard antique horns from estate sales, auctions and animal markets.  In several high profile incidents, Asian agents and buyers have been at the core of these activities as the superstitions of medicinal uses of rhino horn sadly persist.

Reading the news wire reports this Veteran’s Day morning brought back bittersweet memories of working with international Artist & Musician, S. Nzante Spee (Mbem, 1953 – Stockton, CA, USA May 25, 2005). Before Nzante became ill, He and Brother Aloy spoke with me about wild rhinos in Cameroon. He assured that when I visited Africa for the first time, he would take me out into the villages where rhino still roamed hidden in the forest… safe and mysterious. Spee went on to profess that great knowledge of nature, of life, could be found in such places, and that while I could not travel there by myself, he would escort me to these spiritual grounds.

Spee said “these rhino are there Brother Williamz – I swear it! – in a place away from the guns and away from the cameras of men.  White men, outsiders and hunters have never seen them.“ We miss you Brother Spee and I hope you’re are right… that somewhere in the forest the longpipes still stand.

2 replies to “Red Listed: The Western Black Rhino is Extinct”

The Law of the Shaft